If You Feel Average & Not Equipped For The Phenomenal Life...
Get Your FREE Copy Of
AVERAGE SKILL, PHENOMENAL WILL Now...
10 Phenomenal Will Principles That Break Your Through Your Glass Ceiling!
This book is for the underdogs, the ones who know “success” doesn’t have anyone’s name on it.
If you have Average Skill but Phenomenal Will, the world can be yours. I have average skill at best, but my will is phenomenal!!! Eric Thomas

GET THE BOOK FREE NOW!
1
shipping
Where To Ship Book
2
your info
Your Billing Info
Shipping
SPECIAL OFFER CLICK HERE ---> Very Limited Stock Available!
*Average Skill Phenomenal Will retails for $19.95, but we bought it for you! We just ask that you pay your shipping / handling to receive it (just 7.95 in USA Only). Your information is secure and will not be shared.
Edit Shipping Details
Item
Price
FREE + $7.95 SHIPPING (USA only)
(Only Available! Only Left!)
$17
Your order has been declined. Please double check your Credit Card Details or contact support for information.
Credit Card Number:
CVC:
Expiry Month:
Expiry Year:
Item
amount
Dynamically Updated
$XX.00

ONE TIME OFFER: JUST $17: GET THE MP3 AUDIO BOOK PLUS I'll send you my 21 Day Journal to go with the book! Check YES above to add this special offer to your order now. (This offer is not available at ANY other time or place.) 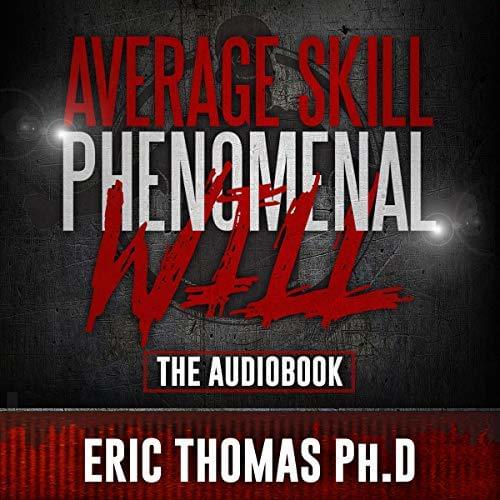 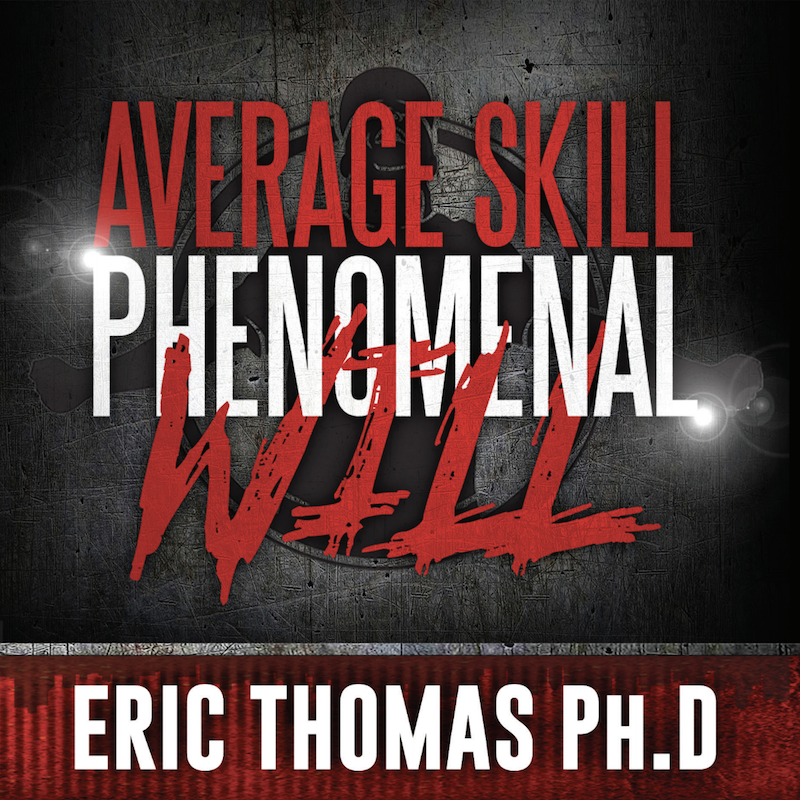 "I'll Pay For The Book,
You Cover The Shipping!
Tell Me Where To Ship Your FREE Copy Today!"
AVERAGE SKILL PHENOMENAL WILL PROVIDES READERS WITH THE PROVEN TOOLS AND RESOURCES WHICH, WHEN PROPERLY AND CONSISTENTLY EMPLOYED, LEAD TO UNPARALLELED SUCCESS!
What's Inside:
In this short, easy to read book you'll learn 10 Phenomenal Will Principles...
Chapter One: THE “120” MINDSET: AWARENESS How to become more aware of your strengths and weaknesses to work on both! Because it’s impossible to know how far you need to go if you can’t be real with yourself about where you are.
Chapter Two: GREATNESS IS UPON YOU! Knowing that some of my heroes failed and still ended up champions empowered me to know there is greatness is each one of us!
Chapter Three: THE “120” ADVANTAGE: NO HANDOUTS I’m not the best, and I’m not the brightest, but I have the heart and drive of a champion. Do you?
Chapter Four: THE “120” TIMELINE: WAITING Sometimes we fail to understand that there’s a timeframe for greatness.
Chapter Five: THE “120” MYTH: THE QUALIFIER How far can influence go if you lack the drive to exercise it effectively?
Chapter Six: THE “120” TIMELINE: MINIMIZE ERROR Recognize that there are things you can’t control, but everything you can control, you must control.
Chapter Seven: THE “120” WILL POWER: GET THERE FIRST Find the gaps, grind while the giants sleep, be relentless..
Chapter Eight: THE “120” MINDSET: EXECUTION The more frustrated I was with the inconveniences, the hungrier I became.
Chapter Nine: THE “120” MINDSET: WILL It was no longer a question of whether I had what it took; it was a question of how badly I wanted it.
Chapter Ten: THE “120” MINDSET: YOU OWE YOU In spite of all of that, I’m still going to be successful because I owe it to myself. Nobody can stop me but me. 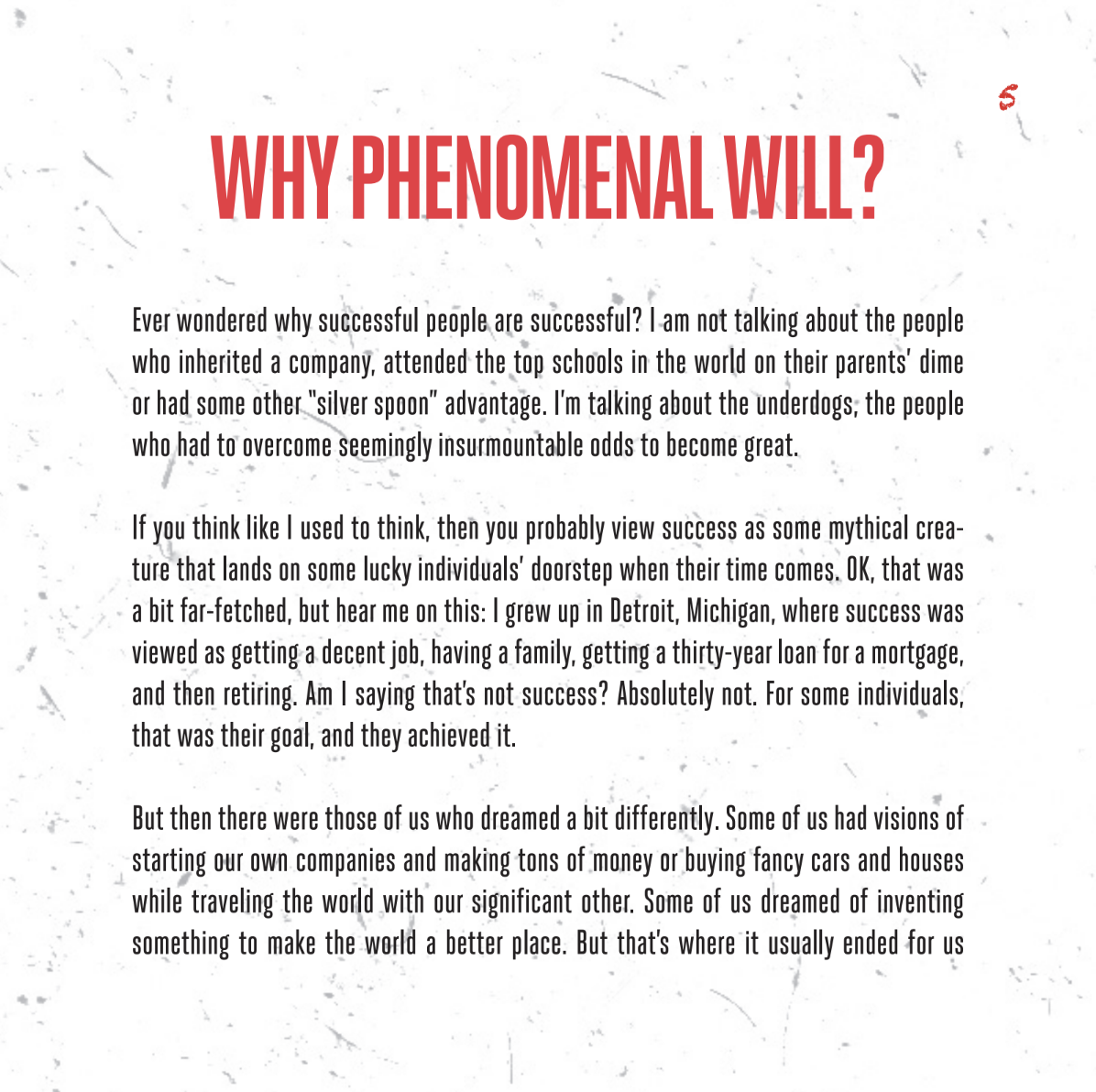 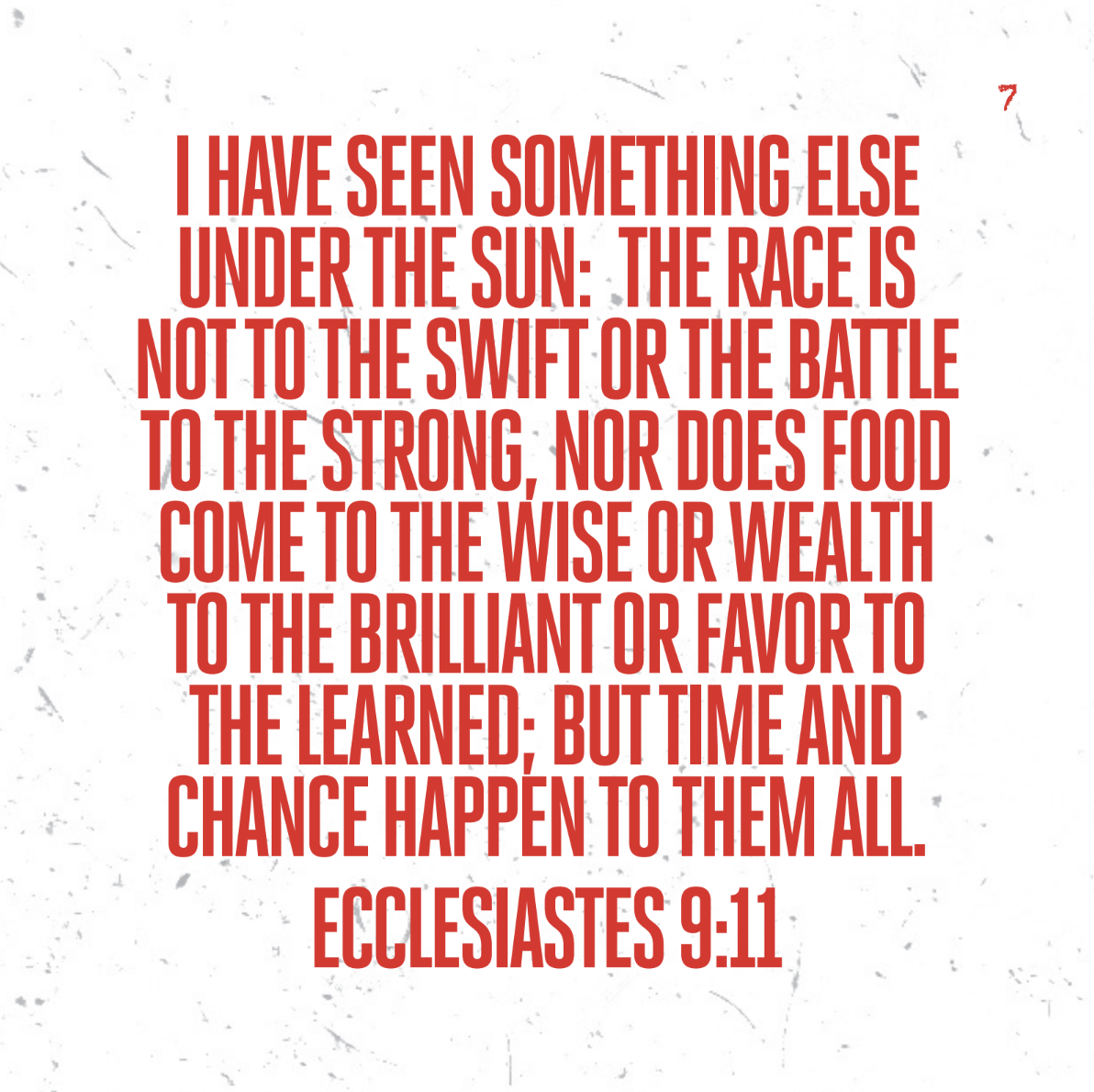 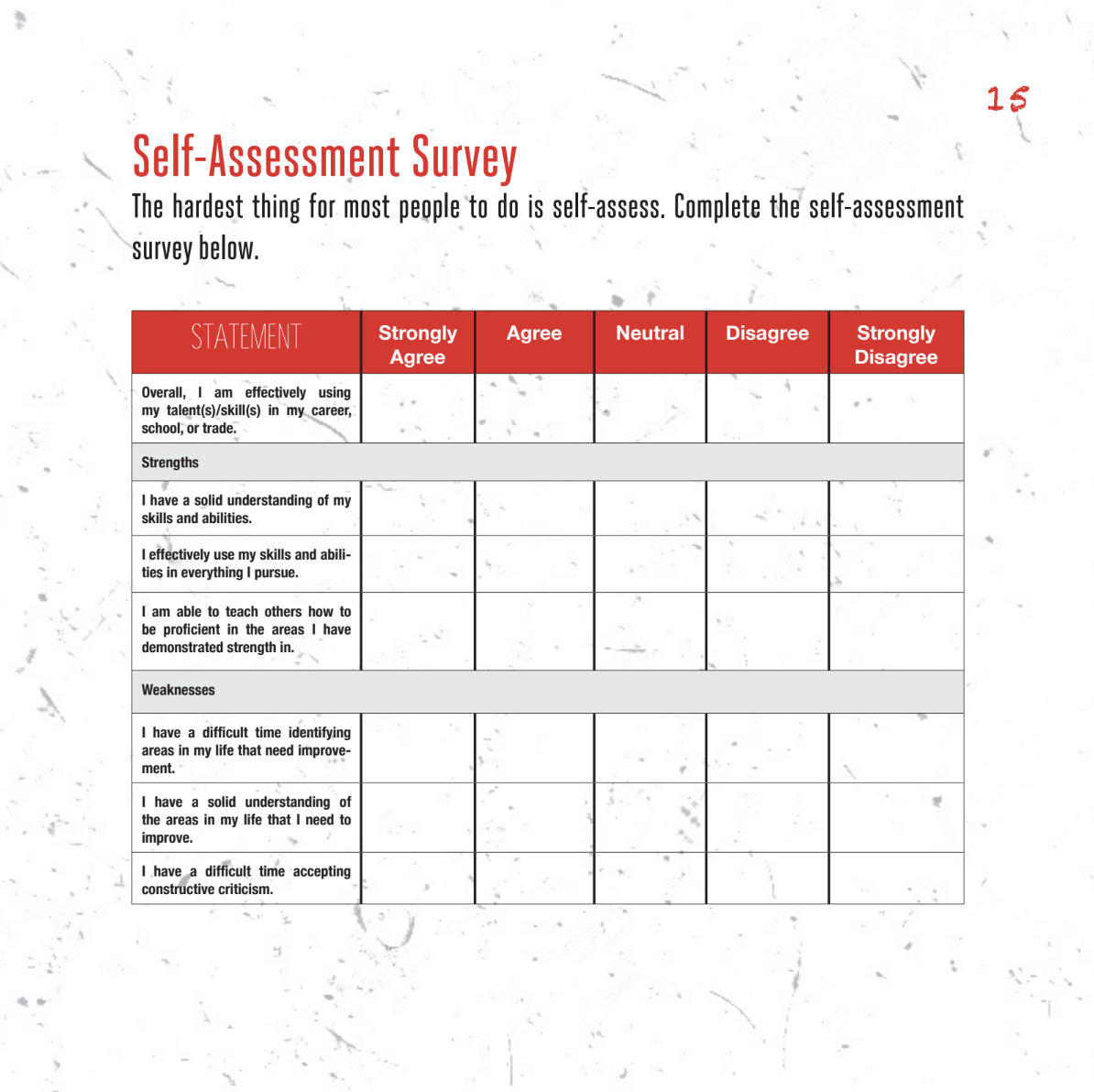 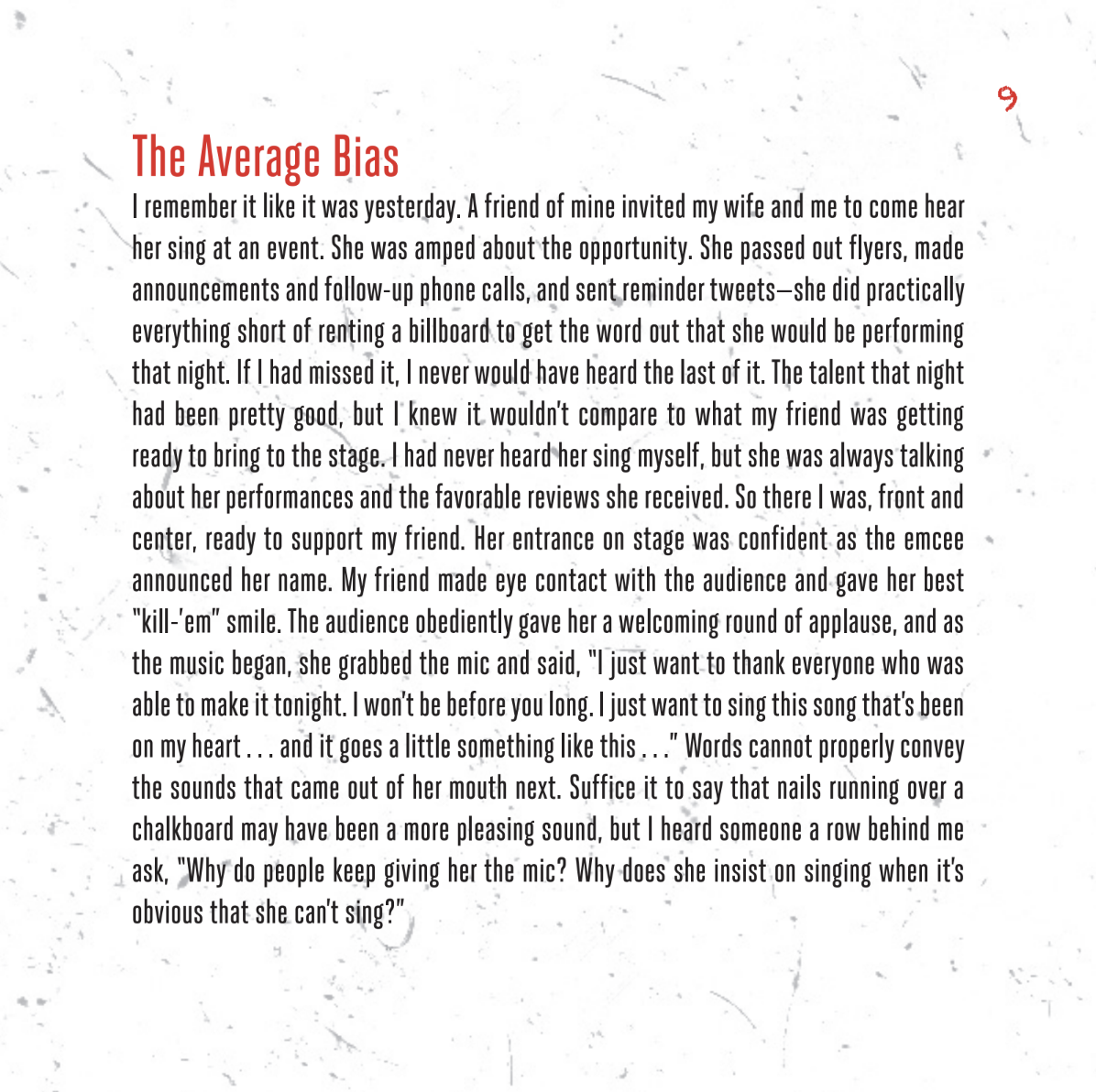 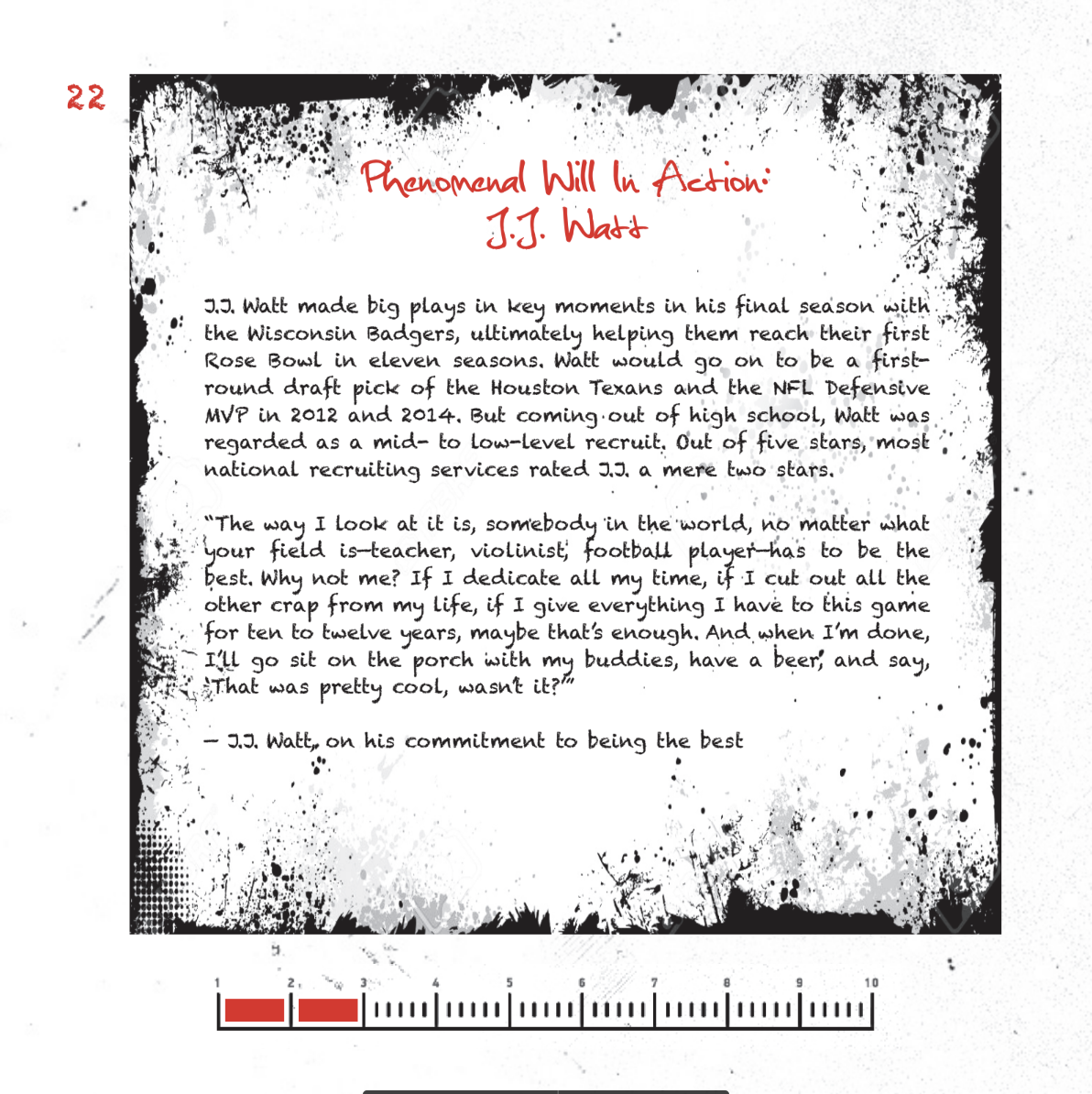 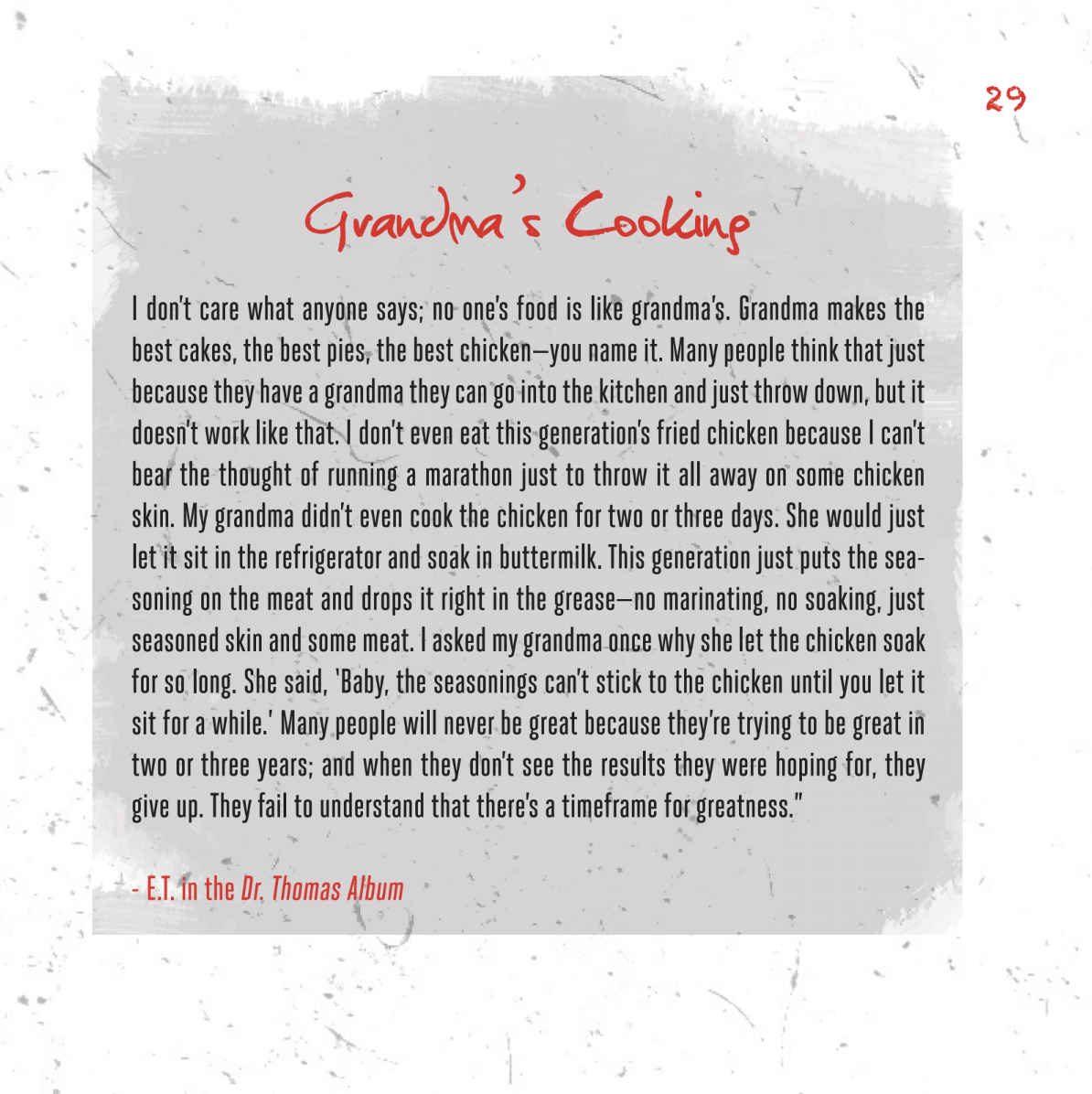 DON’T GIVE UP NOW! YOU ARE ALMOST THERE!
Get Your Free Copy Of The Book Now Just Pay The Small Shipping & Handling Cost
THIS BOOK IS CHANGING LIVES AROUND THE WORLD!
"Proof That 'Average Skill Phenomenal Will' Has ALREADY Dramatically Changed The Performance And Lives Of Countless People Around The World!
"Anybody can be great...it's all about your work ethic and how bad you want it."
~ Raven Jefferson-Brinkley
"I had the average skill, but the Phenomenal Will - that's my 'Why'..."
~ Jeffery Copi
"You have to have that fire in you, and not care what anybody else thinks..."
~ Terrell Dixon
"We have to take what we've been given and maximize it..."
~ Sherry Bradshaw
Ok so here's the deal...
No one is born phenomenal!
Being phenomenal is a choice you have to make every single day!
So what if you fail!
So what if it doesn't work the first ten times!
SO WHAT!
There is only one thing that separates you from your dream, your goal, your future!
That one thing is PHENOMENAL WILL!
Your skill set can be average all day but if your will is phenomenal... Aaaaaahhhhh!!!!
Look, everybody has a story.
The difference between the good, the great and the phenomenal is their will!
Listen to me, there is no secret ingredient, there is no magic button!
ALL THERE IS IS PHENOMENAL WILL!!
You can either sit on the sidelines and wish for it or you can get up, engage and do it!!!
Use your Average skill & Phenomenal Will to make all of your dreams come true! 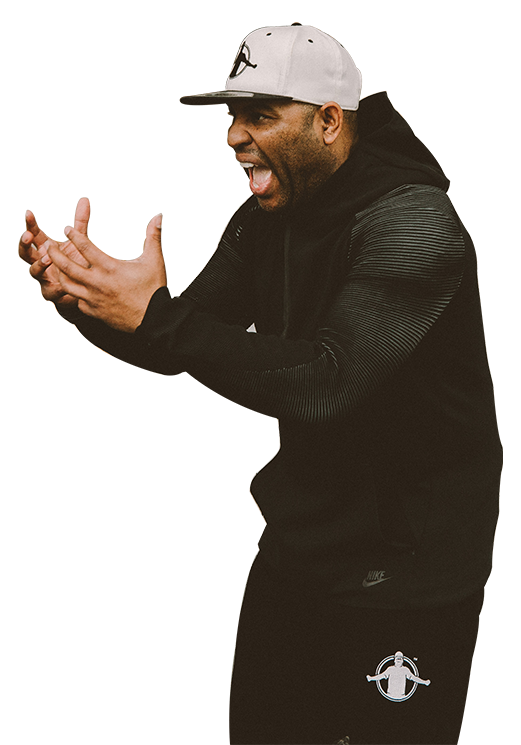 I'LL COVER THE $20 FOR THE BOOK...
ALL YOU NEED TO DO IS COVER A SMALL SHIPPING FEE!
Special Offer! Order Today And Receive FREE Access To...
Bonus #1 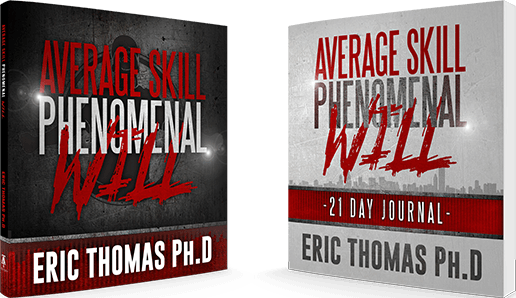 AVERAGE SKILL PHENOMENAL WILL:
21 DAY JOURNAL
Get the 21 Day Journal that steps you through each day and gets you executing on your new success plan!
Don't just read the book, but get your plan happening today!
$39 Value
FREE TODAY!
Bonus #2 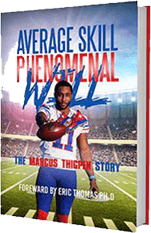 AVERAGE SKILL PHENOMENAL WILL:
THE MARCUS THIGPEN STORY
NFL star, Marcus Thigpen, takes us through his journey of failures turned success in a riveting tale of how iron will and perseverance can change even the most average of circumstances.
$19 Value
FREE TODAY!
Bonus eBook

AVERAGE SKILL PHENOMENAL WILL:
DIGITAL PDF
Get Instant Access to the book and in PDF version today so you don't need to wait to get yours in the mail!
$19 Value
FREE TODAY!
Get Your Free Copy Of The Book Now Just Pay The Small Shipping & Handling Cost
You don’t have to be the best,
you just have to want it and be willing to work for it like “the best” do!
Why Am I Giving It Away For FREE?
Because I'm ET!
And if by giving this book away for FREE, I can just help ONE PERSON break free from AVERAGE and start living the PHENOMENAL LIFE, it will be worth it...
“Comparison is the thief of joy,” a wise man once said. So why are you comparing what
you don’t have to what others do have?
The only thing keeping you from having whatever you want is your will to have it.
That’s EXACTLY what I want for you…
This Is Truly A Limited Offer, So Claim Your FREE Copy Now Before They're All Gone...
Thanks for taking the time to read this letter and I hope you enjoy the book!
P.S. In case you're one of those people who just skip to the end, here's the deal!
I'm mailing you a physical book, "Average Skill Phenomenal Will" (that retails at $19.95) for FREE. Yes, this book is free, and all you pay is $7.95 USD (USA Only)
There's not catch... no gimmicks...
So, Click the button below to get your FREE copy!
Get Your Free Copy Of The Book Now Just Pay The Small Shipping & Handling Cost

This site uses cookies to offer you a better browser experience - Find out more on how we use cookies in our privacy policy
Privacy Policy | Disclaimer | Terms | ShippingSupport | Refund
Get 2 Masterclasses, The Audio Book & eBOOK: Want A HUGE 80% Discount On Our New Courses, Plus Get The Audio Book & eBOOK of Build Your Brand?
These masterclass will give you a simple process to producing a Vlog, Blog, Podcast, Instagram Stories & Posts, Facebook Ads & Linkedin Presence From Doing 10 Minutes Of Video Once A Week, PLUS How to sell to every different personality type!

Check YES above to add this special offer to your order now for just $197 $37. (This offer is not available at ANY other time or place)
NOTE: You will get the INSTANT ACCESS so you can get stuck in today!

Almost 63% Of Our Most Successful Members Choose This Upgrade...